IBA has been family owned and operated from day one and this means that dairy farm families have put food on our table, clothes on our backs and a roof over our heads for four generations of our family. We can never fully express the gratitude in our hearts but we feel truly blessed by the Lord for your kind consideration and patronage over the past half century.

IBA’s Massachusetts headquarters was a foregone conclusion because it was right here in the central part of the State that my Dad’s grandparents settled from Italy. My Mother’s grandparents came from Ireland and Canada and put down roots only several miles from my Dad’s family. So, with the immediate and extended families from both sides all within the same geographical area, this location has been home for well over 100 years. Moreover, since our County had in excess of 300 dairy farms in 1960, it seemed like a good place to start a dairy supply business.

As for the part about an Italian family (actually an Irish and French Canadian family as well) getting involved in the dairy supply business, it really is a story of times gone by.

In retrospect, I think IBA first got started in 1929 when my Dad was literally ‘farmed out’ to his uncle’s dairy at the tender age of 4. His father had just passed away from tuberculosis, the Great Depression was underway and his mother had no formal education so she took jobs as a housemaid, cleaning lady, wash lady and cook for the well-to-do families in town. Try as she may, she could not make ends meet for her and the four children so the two youngest boys (my Dad and my Uncle) were sent to live with relatives and the two oldest boys stayed at home (home being the back of a blacksmith shop) with after school jobs to pay their way.

As I said, my Dad was sent to his uncle’s dairy farm. He did what chores a 4 year old boy could do. He fell in love with dairy cows and marveled at what God’s great creatures could provide for mankind. Even after he left the dairy to return home, his affinity for the dairy cow was ever present. This is why I believe the foundation for IBA really occurred in 1929.

Fast forward to 1943. My Dad is not quite eighteen years old and only midway through his Junior year of high school. World War II is raging, his three brothers are all in the thick of the battle, and he feels he should be with them. He quits high school, joins the Navy, sees his share of action, gets discharged in 1946 and returns home looking for a job with no high school diploma.

He finally secured a job in one of the many textile mills that dotted our area and once gainfully employed, asked for Mom’s hand in marriage. The job at the mill lasted only two months because several of the employees felt my Dad was working too hard and subsequently “roughed him up” a little with the stern warning to “quit embarrassing them in front of the boss.” When he arrived home that day, he announced to my Mother that this was to be “the last day he worked for anybody ever again” and that it was time to start his own business even without the benefit of a high school diploma.

With his love for animals and the dairy cow in particular, he decided to open up his very own grain store in Millbury, Massachusetts and named it, what else, Veteran’s Grain Store. The ‘grain store’ as we affectionately called it, grew and prospered but Dad had bigger dreams, plenty of ambition, a great work ethic and some novel ideas. So in 1960, he re-mortgaged our home (I remember my mother quietly sobbing and saying to my father ‘I hope you know what you are doing’), as well as, the property and buildings that comprised Veteran’s Grain Store, thus, the seed money was raised to give birth to IBA.

With God’s blessing and the support of the dairy farm community, Dad did great things with his brain-child called IBA. By emphasizing quality and value, coupled with unparalleled service and product knowledge, he took IBA to 23 states in the relatively short time span of 13 years. These concepts were and continue to be what our nation’s dairy farm families embrace state by state. Although my father had plenty more to do, the Good Lord had other plans for him and in 1973 he suffered a heart attack at the National Mastitis Council Meeting in Louisville, Kentucky and passed away at the too young age of 47. My father’s dreams were my dreams and all I ever wanted was to follow in his footsteps. After a call from Mom to my Army unit in Alaska to inform me that Dad had died, I was honorably discharged from the service and came home at 25 years old to take the reins of the family business. Mom ‘kept the books’ and helped watch over the company. Later on, I was joined by my brother and sister who are still with IBA to this day.

In many ways, it is hard to believe that I am approaching my 45th year as the keeper of my father’s legacy. Upon reflection, I realize this means I have really enjoyed being part of the dairy industry and meeting all the great people who have been so kind and taught me so much over the years. Of course, for a family owned and operated company to survive and prosper in this day and age of publicly traded companies and/or multi-national organizations, the Good Lord has to have chosen to bless us in a most special way. I really think that this is my Dad’s reward for growing up “dirt poor” and for what he had accomplished through hard work without the benefit of a formal education. The Lord does help those who help themselves.

It is safe to say that I am in the latter stages of my career but I am very proud of the fact that the 3rd generation of our family is in place and ready to go. Our son and daughter have been involved in the business for quite some time and are looking forward to continuing to serve America’s dairy farm families from coast to coast.

I truly hope I did not take too much time in explaining how our family came to be involved with the dairy industry for these past 50+ years but, like most of you, we came from humble beginnings so we can certainly appreciate and understand what you and your families had to endure over the years. We all know family businesses are not a 5-day, 40-hour a week job. Please rest assured that our family will never forget where we came from. Also, because we are a privately owned and operated family company, our philosophy is that we only have to answer to the dairy farm families of the United States of America. We have no outside Board of Directors, no outside shareholders, no publicly traded stock, no parent company here or overseas, and nobody who is going to tell us what we need to take from the industry rather than what we can give back. Our focus and primary obligation is to you and no one else.

In closing, the best piece of advice that I ever received was from my father who said to me on the occasion of my college graduation “Son, just remember, people don’t care how much you know until they know how much you care”. I can promise you that this philosophy has already been passed to the third generation.

How Can We Help?

If you have a question or looking to find your local IBA Dealer,
please contact us and we will respond as soon as possible! 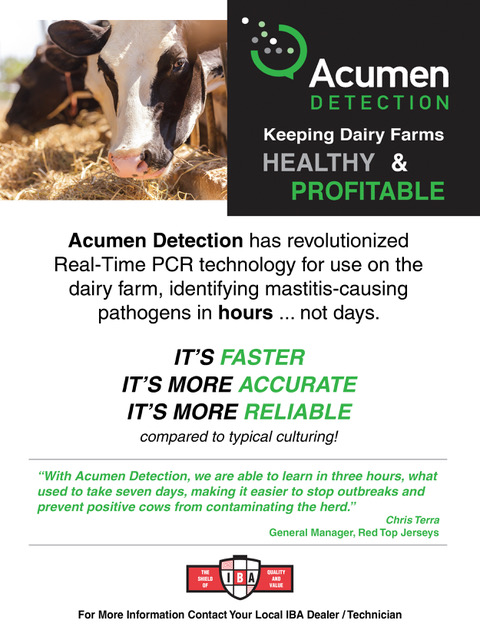